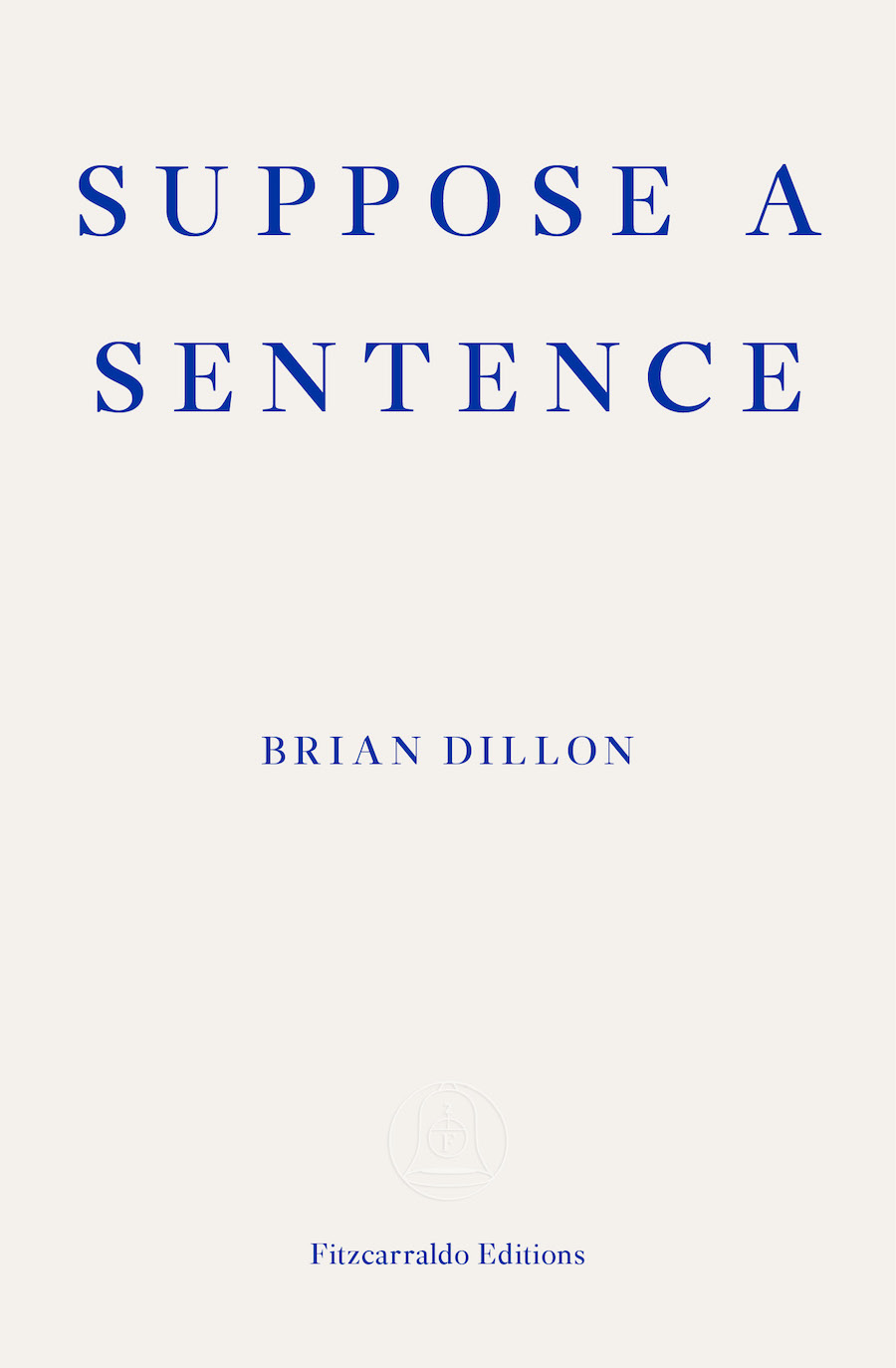 The Art of the Sentence in Literature. A Polemical and Personal Reflection.

In Suppose a Sentence, Brian Dillon, whom John Banville has called 'a literary flâneur in the tradition of Baudelaire and Walter Benjamin,' has written a sequel of sorts to Essayism, his roaming love letter to literature. In this new book Dillon turns his attention to the oblique and complex pleasures of the sentence. A series of essays prompted by a single sentence—from Shakespeare to Janet Malcolm, John Ruskin to Joan Didion—the book explores style, voice, and language, along with the subjectivity of reading. Both an exercise in practical criticism and a set of experiments or challenges, Suppose a Sentence is a polemical and personal reflection on the art of the sentence in literature. Whether the sentence in question is a rigorous expression of a state of vulnerability, extremity, even madness, or a carefully calibrated arrangement, Dillon examines not only how it works and why but also, in the course of the book, what the sentence once was, what it is today, and what it might become tomorrow. With this brilliant sequel of sorts to his acclaimed Essayism, Brian Dillon confirms he is one of the very best essayists at work today.

»Each chapter focuses on a sentence chosen not for its historical importance, nor for its connection to the book’s other essays, but simply out of love. As Dillon puts it, his chief criterion is a sense of “affinity.” What emerges is a record of appreciation, a rare treasure in an age that rewards bashing.«
The New York Times

»Essayist and critic Brian Dillon is in thrall to sentences. For a quarter of a century, he tells us in his marvelous new book, he has been collecting them, in “the back pages of whatever notebook I happen to be using,” ... The product of decades of close reading, Suppose a Sentence is eclectic yet tightly shaped. Mr. Dillon has a taste for the more eccentric prose stylists, and lights with delight upon the likes of John Ruskin ... His essay on Thomas De Quincey is a small masterpiece ... The best and certainly most beautiful piece in the book is on Roland Barthes, “the patron saint of my sentences” without whom “I would never have written a word.”It is easy to understand what Mr. Dillon means when he speaks of Barthes, one of whose books is called A Lover’s Discourse, as “the most seductive writer I know,” for Mr. Dillon’s own book is a record of successive enrapturings.«
John Banville, The Wall Street Journal

»The book has a lot of what I can only call pleasure—of the kind that I imagine athletes or dancers experience when they are doing what they do, which is then communicated to those watching them do it. I share with Dillon some misgivings about general theories and overarching ideas, but in thinking about the writing I enjoy most, this quality feels like the one constant: that the author takes some pleasure in using these muscles and finding them capable of what they are asked. That delight is evident both in the sentences Dillon looks at and in those he writes himself.«
Paris Review

»Reducing great writers and works to a single sentence is a provocative act, but one that in an age of 280-character opinions does not feel inappropriate. Used as we are to monosyllabic messaging and governance by tweet, it is an important reminder of the potential beauty, rather than mere convenience, that can be conjured in concision.[...] SUPPOSE A SENTENCE is an absorbing defence of literary originality and interpretation, inviting us not just to take words as they first appear but to let them abstract themselves before our very eyes«
Financial Times

»Essayist Dillon begins with a fascinating area of investigation – what happens when we pause to consider the potential mind-maps which might be inspired by a single, particularly nuanced sentence? He takes sentences from all kinds of writers [...] and forensically dissects them, sparking a very readable, chatty inquiry into context, voice, biography, etymology, cultural and political history. I might have made this book sound tediously nerdy & dry; instead it is an absolute joy, like getting gently drunk with a convivial big thinker & contagious enthusiast.«
Big Issue

»I loved Suppose a Sentence by Brian Dillon. It’s pleasingly nerdy: a collection of short essays, each on a single sentence, each mixing close reading, biography and the occasional dazzling flash of insight into the pure pleasure of reading and why we bother to do it at all.«
The Spectator, Books of the Year

»In this delightful literary ramble, Dillon (Essayism), a creative writing professor at Queen Mary University of London, expounds upon remarkable sentences from a variety of voices in literature, past and present. . . . The well-chosen sentences themselves are worth the price of admission, but Dillon’s encyclopedic erudition and infectious joy in a skillful piece of writing are what stamp this as a treat for literary buffs.«
Publishers Weekly

»Suppose a Sentence burrows deep into the foundation of prose: the humble, hardworking, endlessly malleable sentence. Dillon riffs on sentences from writers you’d expect and a few surprises (Can you spoil a book about sentences?). The result is, yes, a writer writing about writing, but it’s also a smart person breaking down why and how language works. You don’t have to be a writer to be curious about that.«
LitHub

»These chronologically arranged picks from the 17th century to today are the “few that shine more brightly and for the moment compose a pattern.” The author plumbs biography, autobiography, and history to add context and background, with particular attention to each author’s literary style. . . . A learned, spirited foray into what makes a sentence tick.«
Kirkus Reviews

»Ultimately, this is a book about love...On the frequent occasions that Dillon is overtaken by enthusiasm for the prose machinery [...] he resembles a professor of anatomy falling into a cadaver in his enthusiasm...This is no bad thing.«
ArtReview

»Dillon’s great achievement has been to gather the voices of his subjects into a single room, succinctly and effectively portraying the echo chamber in which all literary creation takes place.«
The Coachella Review

»Dillon’s writing plays an exquisite critical sensibility against an exuberant celebratory impulse. He homes in on particular formal decisions (why is this comma here rather than there) and he makes it clear why he loves the sentences he does. [...] Dillon, like all good critics, refuses the distinction between hermeneutics and erotics. He shows how pleasurable sentences can be, and he does so through supple, sophisticated interpretation.«
Commonwealth

»One of our most innovative and elegant nonfictioneers.«
Robert Macfarlane

»Brian Dillon is, I think, one of the great contemporary essayists, and maybe the most consistently interesting and stylish of Irish writers. Suppose a Sentence seems like the book he was always destined to write: a collection of short essays, each of which takes as its subject a single sentence that intrigues and provokes him. I found it joyful and inspiring, and it's a book I will be returning to again.«
Irish Independent

»Reading Brian Dillon’s brilliant book, I was repeatedly struck – because each one of the book’s short sections is a wholly captivating demonstration of this fact – that a sentence, just a single sentence, can hold and release an event. “Close reading”, in Dillon’s hands, starts to look like a form of “close living”: a life-practice that makes an everyday value out of paying serious, open-minded attention, especially to what is hard to understand.«
Kate Briggs

»Taking as his starting point a sentence that has intrigued him for years or, in some cases, come into his ken more recently, Brian Dillon in Suppose a Sentence ranges through the centuries exploring the associations of what he observes and discovers about his object of study and its writer, through biographical anecdote, linguistic speculation, and a look at related writings. This rich and various collection resembles a beguiling, inspiriting conversation with a personable and wry intelligence who keeps you happily up late, incites you to note some follow-up reading, and opens your eyes further to the multifarious syntactical and emotional capacities of even a few joined words of English. Enjoyable and thought-provoking reading!«
Lydia Davis

»Brian Dillon is one of the true treasures of contemporary literature – a critic and essayist of unmatched style, sensitivity and purpose – and Suppose a Sentence is a book only he could have written. It’s an inspired celebration of the sentence as a self-sufficient artform, and reading it has reinvigorated my sense of the possibilities of writing itself.«
Mark O'Connell

»Dillon has brilliantly reinvented the commonplace book in this witty, erudite, and addictively readable guide to the sentences that have stayed with him over the years.«
Jenny Offill

»A collection of reflections on the nature of the sentence, made me wonder why any of the rest of us bother trying to write non-fiction.«
Ian Samson for The TLS Books of the Year 2020

Brian Dillon is a writer and critic. His books include Essayism, The Great Explosion (shortlisted for the Ondaatje Prize), Objects in This Mirror: Essays, I Am Sitting in a Room, Sanctuary, Tormented Hope: Nine Hypochondriac Lives (shortlisted for the Wellcome Book Prize) and In the Dark Room, which won the Irish Book Award for non-fiction. His writing has appeared in the Guardian, New York Times, London Review of Books, Times Literary Supplement, Bookforum, frieze and Artforum. He is UK editor of Cabinet magazine and Professor of Creative Writing at Queen Mary, University of London as well as Visiting Professor in Writing at the Royal College of Art.