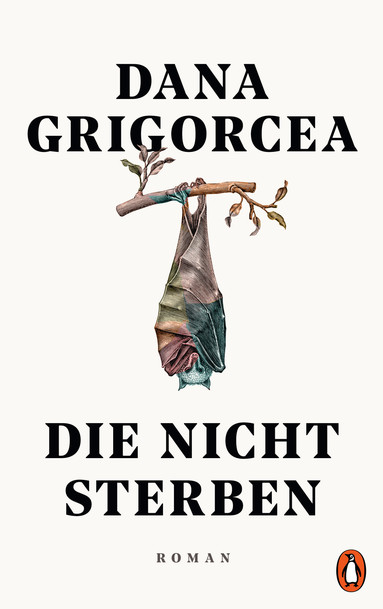 Those Who Never Die

The novel’s narrator has spent her childhood summers in a village referred to as B., nestled in the foothills of Wallachia near Transylvania. Her family has had a villa there for many years and the narrator remembers these summers as fun and light-hearted. An ominous undercurrent is introduced early on, however, in the form of a river behind the villa that sometimes flows red, coloured by dye from the local textile mill.
After finishing her studies at art school in Paris, the narrator returns to B., where she makes the shocking discovery that her family crypt contains the grave of Vlad the Impaler. News of the discovery of Dracula’s grave spreads quickly and throngs of tourists travel to the village, boosting the local economy and enabling the mayor to build a Dracula-themed amusement park. As the days go by, the narrator feels a strange power growing in herself while wishing that the circus of pilgrims would end. She finds her days filled with anger and her senses inexplicably sharpened, and when green smoke appears in her bedroom, she is convinced she is becoming a vampire. As a descendant of Prince Vlad, was this always going to be her fate?

While, in the beginning, she is afraid of mixing up the chronological order of events, she eventually comes to realize that every order makes sense. Because a story is not about causes and effects but about one thing only: Fate. (new books in german)

Eerie, profound, archaic. Those Who Never Die is a strange, dream-like Gothic novel set in post-Communist Romania, reflecting insightfully on Romania’s past and the social changes in the country since the fall of the Iron Curtain, as well as a political commentary on post-communism, the revanchist return to traditional values and myths and the nature of truth and perception.

»An outrageous, extremely illuminating novel […] Grigorcea has important things to say, and little time for poking about in the emotional fog of her own identity […] She mixes past and present horrors so skilfully that she entirely succeeds in her literary aim – which you might call subversion through affirmation.«
Der Tagesspiegel

»Dana Grigorcea is immensely skilled when it comes to creating athmospheres and telling stories which work as miniatures, and, in doing so, evoke not only a forgotten era but also establish something new: The stories are 'woven' together to create a unique and masterful narrative. She plays with the readers as if she wanted us to know that there is more to the story that meets the eye; we should pay attention, or our blood would be in it, too.«
Bridge Festival Athens

»With a mixture of wistfulness and wit, Dana Grigorcea describes a society, which will soon be plunged into gloom as the Romanian-Swiss author resurrects the voivode prince Vlad.«
Die Presse

»THOSE WHO NEVER DIE shows what happens to a society that prefers to awaken bad ghosts of the past rather than face the present. Topical far beyond Romania's borders.«
SRF

»In every aspect a fantastic novel!«
WDR

»The novel proves that she can write sensuously, pithily, and with an eye for comedy – while playfully and imaginatively portraying a piece of history.«
Tagesanzeiger

»Dana Grigorcea is about superstition, delusion, political radicalisation. Those Who Never Die is fascinatingly unsettling. This novel fits into every beach bag, so that you are safe from vampires under the sun!«
3sat, Sandra Kegel

»A magical blend of myth and reality.«
Bieler Tagblatt

»Relating the historical level to the current and at the same time bringing the myth into play with (historical) reality is as entertaining as it is eloquent. A story that can also be understood as a warning, as Dana Grigorcea says: beware of the longing for 'the strong man' - rampant not only in Romania.«
WDR

»A mix of true suspense and political fable - a great achievement!«
Radio Eins

»In this magnificently narrated novel, which bears both visionary-phantasmagorical and grotesque features (...) Dana Grigorcea weaves numerous historical and narrative threads and layers together and around each other with somnambulistic certainty and dreamlike spinning.«
taz

»Dana Grigorcea is more concerned with dialectical vampirism, which she characterizes elegantly and as if flying by: Masters and servants, impaler and impaled are never just for themselves, but suck each other dry until the last land is poisoned, the last money embezzled. Dazzling allusions, cleverly staged laughter (...) A sense of humour Dana Grigorcea is letting sparkle fabulously. A marvellously scintillating comedy.«
Die ZEIT

»With dark wit and gentle humour, she makes worlds collide: the slightly snobby Bucharest bourgeoisie and the cunning cynics in the provinces; the present and the past; myths and superstitions. […] Her skill lies in creating a backdrop bigger and bolder even than the stories themselves. […] All the while, she conjures up a new literary genre – the political Gothic novel – and all we can do is wonder why it hasn’t been done before.«
NZZ

»A fantastic, free-floating but rational look at the horrors and everyday life of Romanian society before and after Ceaușescu.«
Frankfurter Rundschau

»Those Who Never Die is a narrative work of art: the intense colors, the comprehensible lust for revenge, the pleasure of splattering blood and the harsh shadows that leave essential things in the dark, evoke an aesthetic that could be modeled on Carvaggio's 'Judith and Holofernes'. [...] - an atmospheric and stirring narrative that creates understanding for moments of emotion where rational explanations fail miserably.«
Schweizer Buchjahr

»Grigorcea's vivid and powerfully written novel is a nightmarish fairy tale, thriller and bleak social commentary rolled into one.«
Kulturnews

»Dana Grigorcea has written the ultimate Dracula story for the 21st century. An incisive novel!«
MDR

»Grigorcea’s distinctive writing style is rich and textured, with an antiquated feel that is in keeping with the Gothic literary tradition the novel plays with. Those Who Never Die is a thoroughly enjoyable read: delightfully literary and thoughtful and full of fascinating details about Romanian culture (...).«
New Books in German

»Her prose is as if painted with thick brushstrokes, swashbuckling, pleasurable, lush, and humorous.Grigorcea resurrects the voivode Count Vlad with a novel that glitters like a black rainbow.«
Die Presse

»The author's youth in a country shaken by world history makes the novel memorable beyond its literary qualities.«
Der Bund, Sonntagszeitung

»The novel is riveting not only for the story of Dracula, but also for the scenes and imagery with which she describes post-communist Romania [...]. A stunning, literary talent.«
SRF Kultur TV 'Literaturclub'

»A novel located between waking and dreaming, past and present, fact and fiction.«
Bücheratlas

»Grigorcea's powerful visual and linguistic novel is a horror story, a thriller, and a gloomy portrait of society all in one.«
Kulturnews

»Historical periods are blurred in this novel, which employs highly poetical devices to cast a sharp eye over the political fissures of the post-communist world. An artful Dracula story, a portrait of an artist as a young woman, and a farce, told with great stylistic power«
SWR2

»A unique, captivating novel which tackles a wealth of topics, as mysterious as it is fascinating – definitely one of the highlights of the year.«
Letteratura

»Grigorcea skilfully plays with various horror devices, while having an altogether different target: the corrupt politicians of the post-communist era, the real bloodsuckers.«
Kleine Zeitung

»Literary as well as human daring is in the books from Dana Grigorcea.«
Berliner Zeitung

Dana Grigorcea was born in Bucharest, Romania, in 1979 and lives in Zurich. She came into contact with the German language at an early age because her nanny only spoke German with her and her middle-class family advocated that she attend the comparatively little indoctrinated German school during Ceausescu's dictatorship. Grigorcea studied German and Dutch philology in Bucharest, then theatre and film direction in Brussels and quality journalism in Krems. She worked as a university lecturer and arts editor and has lived in Zurich as a writer since 2011. She has received numerous awards for her novels and short stories, including the 3sat Prize at the Ingeborg Bachmann Competition. THOSE WHO NEVER DIE is longlisted for the German Book Awards 2021 and was awarded the Swiss Literature Prize 2022.